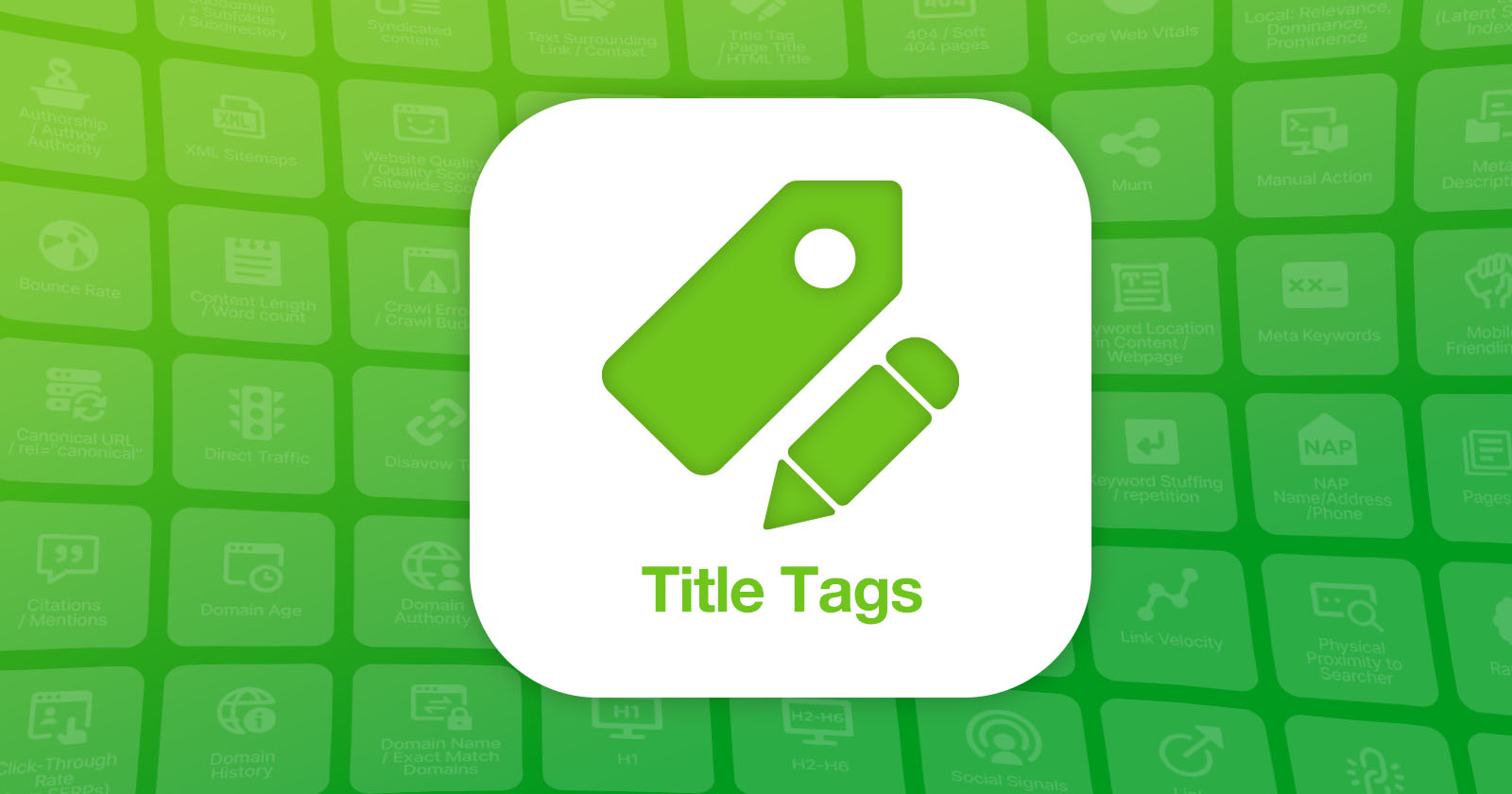 An association between page titles and Google search rankings exists as strongly today as in the early days of SEO.

People of all levels of SEO knowledge agree that optimizing page titles is vital to success in search.

And how could you argue?

Page titles are the most visible component of Google’s search results pages (SERPs); it’s easy to conclude they carry weight as a ranking factor.

But, more optimization is not necessarily better. Optimization can cross the line into manipulation. That’s when you’re writing for search engines before actual people.

Historically, Google devalues ranking factors when the level of manipulation reaches a point where it’s dragging down the quality of search results.

A prime example of this is domain names, which Google once valued so highly that it was difficult to rank without keywords in your URL.

That’s a thing of the past, and now it’s equally possible to rank with an obscure brand name in your URL as it is with a keyword-based domain.

As Google search matures, it’s logical to wonder if page titles may go in a similar direction. Will Google eventually get fed up with the spam and reduce the weight of the page title ranking factor?

Who knows what’s in store for the future, but we haven’t reached that point yet. There’s no question about Google’s algorithms considering page titles.

Instead, the questions around page titles are:

In this piece, we aim to answer those questions by investigating various claims and looking at on-the-record statements from Google.

The Claim: Title Tags Are A Ranking Factor

A page title is the text that appears in the <title> tag within the <head> element of an HTML document.

Page titles are the most prominent and most visible element of a page snippet when conducting a Google search.

A page’s title also appears in the browser tab after clicking through a search result.

Is it possible these claims are overblown?

The Evidence For Title Tags As A Ranking Factor

Google unquestionably uses the HTML title tag to understand what pages are about so it can rank them in search results.

But when it comes to the strength of page titles as a ranking factor, evidence suggests they’re only a mild signal.

Google’s John Mueller has stated that page titles are not critical for rankings, at least compared to the main content:

“We do use [the title tag] for ranking, but it’s not the most critical part of a page. So it’s not worthwhile filling it with keywords to kind of hope that it works that way.”

Mueller goes on to clarify that page titles are important for SEO, and they are a ranking factor.

However, they’re not so critical that overhauling a site’s page titles will significantly affect ranking positions. He said:

Mueller addressed this again on another occasion, reiterating that page titles help Google understand what a page is about but are not critical to determining rankings.

With all this taken into consideration, it’s clear that page titles remain essential for SEO.

But in the hierarchy of today’s ranking factors, title tags are nowhere near the top.

Our Verdict: Title Tags Are A Ranking Factor

Page titles are a confirmed Google ranking factor, with evidence suggesting the strength ranges from mild to moderate.

A title tag is a tool for communicating what a page is about to Google.

It helps search algorithms understand what category the page fits into and which queries it may be able to answer.

From there, Google uses more critical factors, such as the main content, to determine a page’s ranking.

To be sure, it’s worth taking the time to write out titles for every page.

Websites can struggle to gain any ground in search results without unique page titles as a bare minimum optimization.

Since we published the first version of this ebook, Google released an update on how it generates page titles in search results.

Google replaces page titles in SERPs when the provided title isn’t relevant to a user’s query.

Specifically, this happens when the main content is relevant, but the title doesn’t directly speak to what a user typed in the search bar. Google will replace the page title with a piece of text more likely to catch the searcher’s attention.

Indeed, this impacts the appearance of search results but doesn’t impact rankings.

Google confirms it uses original page titles for search rankings even when replaced in SERPs. There’s no need to worry about your optimization efforts going to waste.

10 Ways To Optimize Your Site For Future SEO Success

9 Methods How To Gather Data In Your Market Research

Google Algorithms And Updates Focusing On User Experience: A Timeline