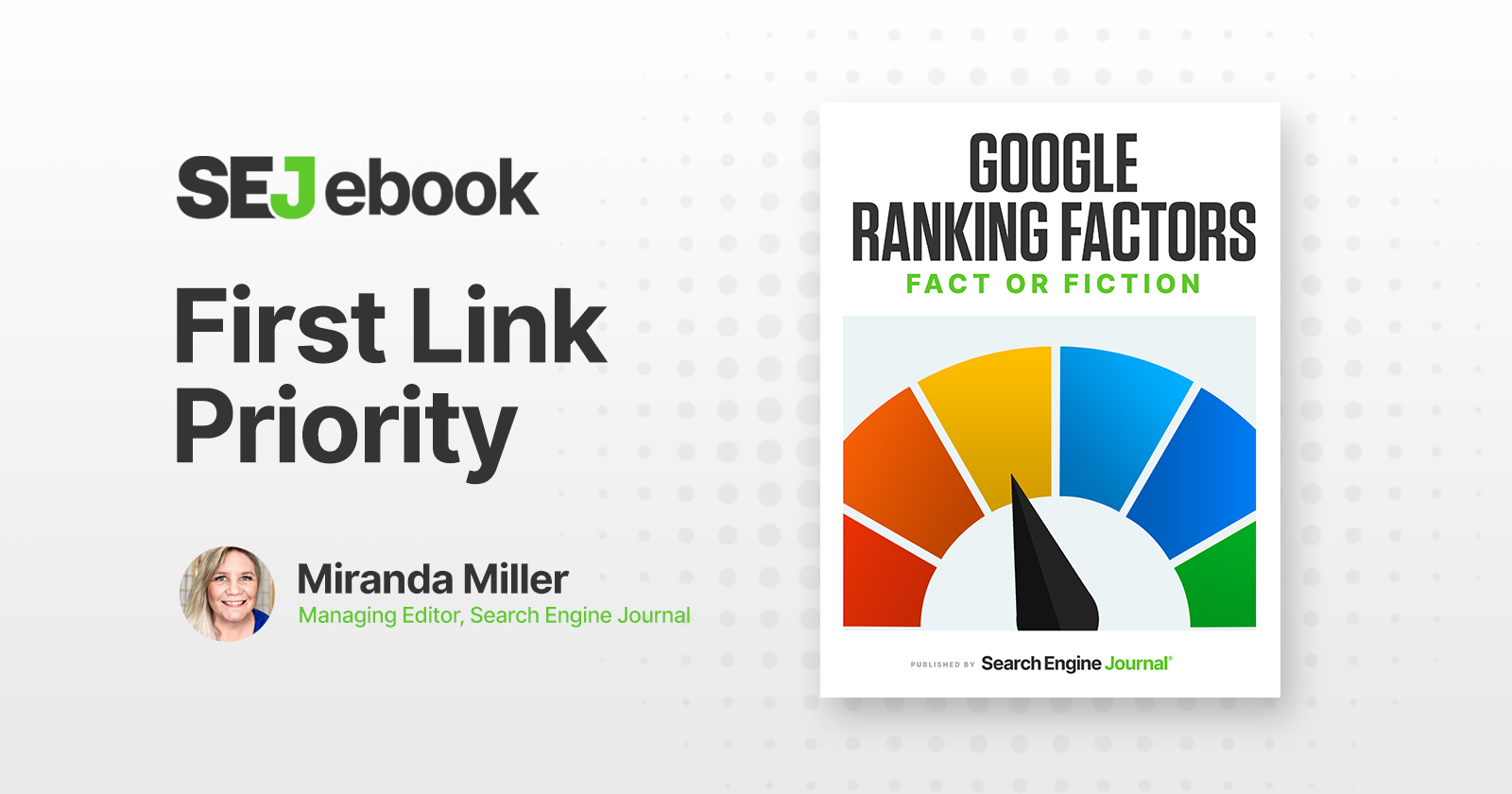 If you have two internal links on a single page both linking to another page on your website, does Google value one more than the other?

And can you use the anchor text in your internal links to signal to Google which keywords you’d like to rank for?

What about an external page linking to your page twice – does the second link pass as much PageRank as the first?

These are all questions triggered in conversations about first link priority.

There’s a bit to unpack here, so let’s get right to it.

The Claim: First Link Priority As A Ranking Factor

There are two separate issues here that have been associated with the term first link priority at various points over the years:

If Page 1 on your site links to Page 2 on your site twice, Google only considers the anchor text of the first link in ranking Page 2.

Therefore, if you want a specific page on your site to rank for [red hot bananas], you’ll make sure [red hot bananas] is used as anchor text in the first-appearing link from Page 1 to Page 2.

When YourWebpage.com links to MyWebpage.com multiple times, Google counts the first link and ignores every other link after that.

(This is the theory that appears in a Featured Snippet on the term today, so to anyone new to the industry, this will be their most likely understanding of the topic.)

The Evidence For First Link Priority As A Ranking Factor

Some of the articles and blog posts that advocate for first link priority as an internal strategy point to a post by Rand Fishkin, who said he tested this out, as proof:

“…let’s say that on your website’s homepage, you have two links to your blog.

The first link is in the top level navigation, and the anchor text is [blog]. The second link is in the body of the homepage and reads [celebrity news blog].

That second link’s anchor text is NOT going to help the blog page rank for [celebrity news] because Google doesn’t appear to count the anchor text from multiple links to a target from a single URL.”

And even then, he said,

“On stuff like this, it’s never a good idea to just take my word for it (or anyone else’s) – run the tests yourself and see the results you get. Since the engines are evolving all the time, the results might be different in six months or six days.”

Or, you know, more than a decade later.

From an external backlink perspective, SEO pros wondered and debated whether there was any point in getting more than one link from a single domain.

The general consensus circa 2010-2012, as far as memory serves me, was that getting multiple links from a single domain still had value so long as they were different pages linking. Some did say there were diminishing returns on each additional link, though.

There is some evidence that both of the above strategies worked back then, and I don’t doubt the SEO pros who say it worked for them.

But what about now?

The Evidence Against First Link Priority As A Ranking Factor

John Mueller spoke about this in a 2018 Google Webmaster Central office hours, in response to a user-submitted question. He said:

Rather, that’s something that our algorithms might choose to do one way or the other.

SEO pros have, in the past, gone to great lengths to try to reverse engineer how Google perceives and treats multiple internal links to the same resource on a single page.

Check out this experiment from 2011.

Here’s what Mueller had to say about these sorts of attempts to crack the “first link priority” code:

“I know people do SEO experiments and try to figure this out, to try and work out, ‘Oh, Google currently does it like this.’

But from our point of view, that can change and it’s not something we have defined. So even if you manage to figure out how we currently do it today, then that’s not necessarily how we’ll do it tomorrow, or how it always is across all websites.”

Some SEO pros choose not to believe Google when they speak out about these things.

But here’s the thing.

What he said about context makes a lot more sense than having a hard and fast rule about it, based on what we know about how Google operates today.

Google has developed RankBrain, the Knowledge Graph, and other tools/technologies to help the algorithm better “understand” so much more about the content it’s evaluating.

Also, having a hard and fast rule limiting PageRank passed on from one domain to another doesn’t make much sense anymore, either. It was probably a necessary spam-fighting tactic at one point.

But Google can algorithmically discern so much more about the relationship between entities and pages now. There are a lot of other ways to tell whether a link makes sense as an actual endorsement of a piece of content.

First Link Priority Is Not A Ranking Factor

You can’t tell Google which search terms you’d like to rank for by virtue of which anchor text you use first in your internal links.

Google doesn’t have some kind of governor that limits how much trust or authority can pass between entities (in various signals including but not limited to PageRank).

This could potentially keep useful resources from being discovered, which is counter to everything Google is trying to do.

Your priority in internal linking should always be to facilitate a seamless, intuitive user experience first. Internal links are for helping people move around and navigate your site.

Any utility they may have had as secret keyword signals to Google died off a long time ago.

As for your backlink strategy, it’s far smarter to focus on creating content people want to link to than to fret about potentially wasting PageRank by virtue of who’s linking to you too often. This approach will work more consistently over time.

Bottom line: Google does not use first link priority as a search ranking signal.

Revenue You Are Losing From Organic Traffic Declines [Webinar]