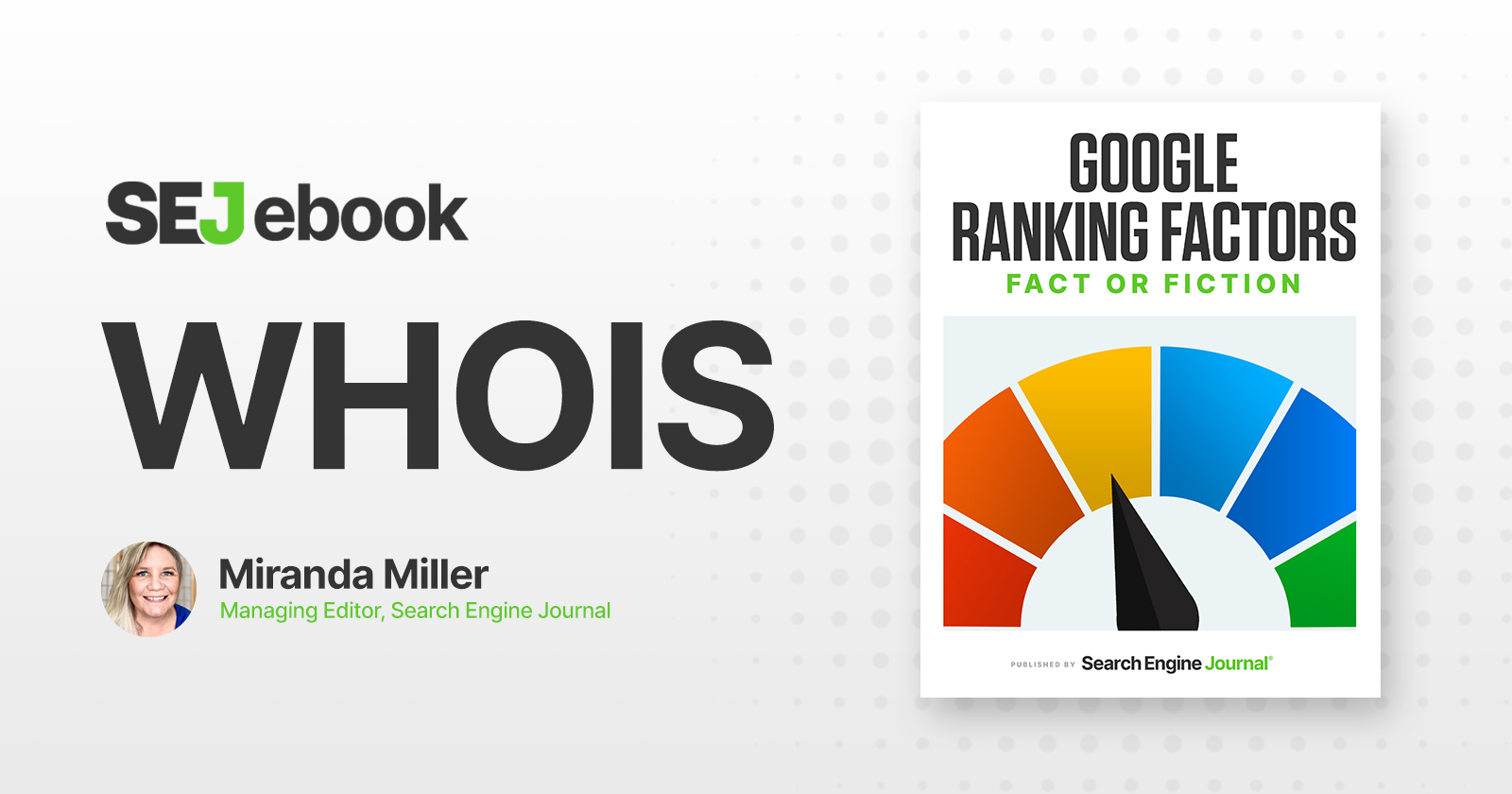 When you register a domain, the registrar has your identifying information.

However, you can choose domain privacy protection if you don’t want the names, addresses, phone numbers, etc. of website contacts listed in WhoIs for all the world to see.

There are plenty of legitimate reasons people want to protect their privacy online.

But does WhoIs information – or using domain privacy – have any SEO implications?

The Claim: WhoIs Information Is A Ranking Factor

Some of the questions that have come up around the potential impact of domain privacy on SEO include:

The Evidence For WhoIs Information As A Ranking Factor

When Google became a domain registrar in January 2005, SEO professionals were immediately suspicious about how registration information might be used in the ranking algorithm.

Barry Schwartz noted the following month that a Google spokesperson had fanned the flames with this comment to the New York Times:

“While we have no plans to register domains at this time, we believe this information can help us increase the quality of our search results.”

There was no real industry consensus on this for a few years, as SEO pros and webmasters shared conflicting experiences and advice in forums.

In 2007, an industry blogger cited Matt Cutts as the basis for this recommendation:

“Don’t hide behind domain privacy services if you don’t have a legitimate need to.

There is evidence that search engines can see right through this ‘wall’ anyway and it makes your site less trustworthy to normal (albeit tech savvy) visitors/customers.

As Loren Baker said at the time:

“By not wanting to be spammed in your inbox, mailbox, phone box or possibly even via your XBox, are you telling search engines that your site cannot be trusted? I’m not sure this is the case.”

The above blogger made that recommendation based on what Matt Cutts wrote of the site reviews he’d done at Pubcon in 2006:

“Rather than any real content, most of the pages were pay-per-click (PPC) parked pages, and when I checked the whois on them, they all had “whois privacy protection service” on them.

Even then, there was no evidence that “hiding” behind domain privacy protection and opting to keep your home address out of the WhoIs database had any impact on ranking.

As Cutts said, it could be perceived by the webspam team as a red flag. But he was talking about it popping up in conjunction with other factors.

That was all a long time ago, so let’s get more current.

In 2016, an SEO pro published a case study on a fairly reputable site claiming that WhoIs was a trust factor, and he could prove it.

Specifically, he said, the address you use in your WhoIs contact info must be in the same general region that your site serves.

Turning on domain privacy protection or using a mailing/physical address outside of the area your site intends to serve would kill your rankings. Or so the story goes.

We have to look at the wider context of the state of Google at this point.

Google was into (or had gone through) many iterations of identity detection and verification methods by then — Google+, Authorship, IPv6, etc.

This Whiteboard Friday episode with Cyrus Shepard from May 2014 gives us a look back at the various signals and clues Google was using even then to determine who controlled which sites.

The algorithms had become far more sophisticated than when we were having these conversations in 2005.

Given that the SEO pro simply presented a story with no backing evidence, it’s difficult to buy into that anecdotal experience that Google considered WhoIs/domain privacy a trust factor in its ranking algorithms in 2016.

The Evidence Against Whois Information As A Ranking Factor

So let’s get more current.

In 2019, John Mueller responded to a tweeted question as to whether domain privacy settings affect SEO. He was clear:

No, feel free to use the privacy settings as you want them.

And today, Google has only a 2% market share in domain registration.

They don’t have access to enough data for this to have any reliability as a search signal.

In 2021, Mueller was again asked (this time on Reddit) whether domain privacy settings impact SEO or rankings.

WhoIs Information As A Ranking Factor: Our Verdict

There’s no evidence that Google ever used domain privacy protection as a ranking factor.

Perhaps they planned to back in 2005 when they first became a domain registrar.

Maybe they even did, for a short while.

But not for long, if so – and they definitely aren’t using it today.

With that said, if you’re attempting to mask the identity of site owners to create link networks or otherwise manipulate search rankings, you’re solidly into webspam territory.

That puts you at risk of a manual penalty if detected.

Google recognizes that online privacy is important and there are perfectly valid reasons people choose to keep their personal information out of WhoIs.

WhoIs is not a ranking factor.

Stick a Fork in Them; They’re Done

How To Create Your Google People Card