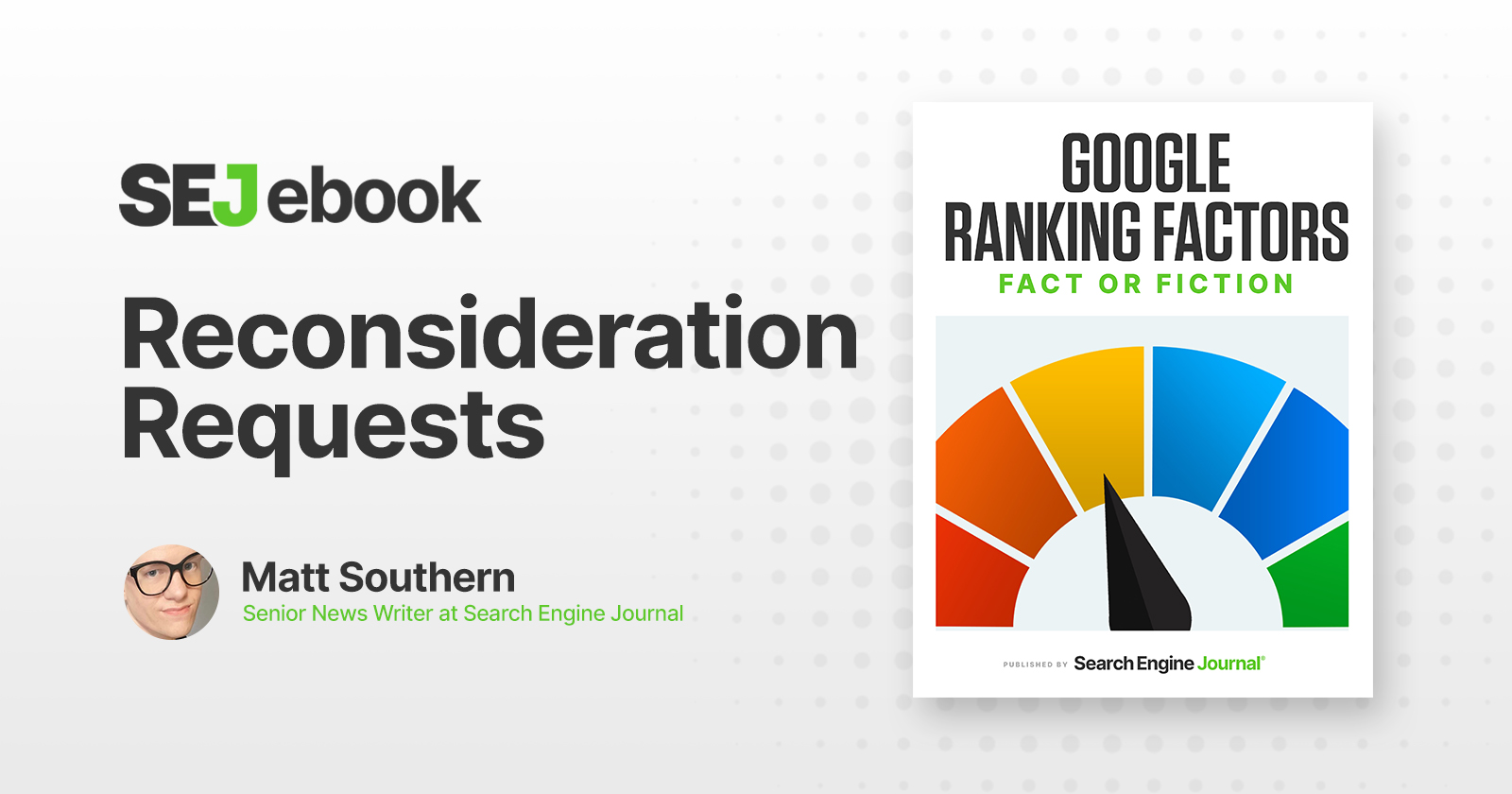 Reconsideration requests are indirectly related to search rankings, as they’re an essential step in the process of recovering from a Google manual penalty.

They make the difference between a site getting reinstated in search results or remaining deindexed.

Reconsideration requests play an important role in SEO when rankings are manually held down by Google, but it’s not accurate to call them a “ranking factor.”

Here’s more about the relationship between reconsideration requests and search rankings, and how they can get your site out of a critical situation.

The Claim: Reconsideration Requests Are A Ranking Factor

All site owners should be familiar with reconsideration requests.

At the same time, you hope you never have to deal with one firsthand.

If you’re dealing with a reconsideration request, it means a site you’re working with has been hit by a manual action (aka a Google penalty).

The site is now either demoted in search results or entirely removed from Google’s index.

You may have heard submitting a reconsideration request can help remove a manual penalty and get your site ranking in Google again.

Yes, that’s what they’re designed to do.

Site owners must submit a reconsideration request in order to recover from a manual action.

There’s more work involved in submitting a request than it sounds, however, and if the necessary steps aren’t completed the request will be denied.

The next section goes over what’s involved in the reconsideration request process and how to submit one that meets Google’s approval.

The Evidence: Reconsideration Requests As A Ranking Factor

According to a Google Search Console help documents:

“A reconsideration request is a request to have Google review your site after you fix problems identified in a manual action or security issues notification.”

A reconsideration request does not apply in situations where a site is demoted in Google’s search rankings for reasons unrelated to a manual action, such as a broad core algorithm update.

It’s reserved only for manual actions or security issues.

As Google’s document states, site owners will be notified if and when they’re required to submit a reconsideration request.

The notification will state what specifically led to the penalty and what needs to be done to recover from it.

When all of the issues listed in Google’s message are fixed, it’s time to move on to the next step.

Requests are submitted in the form of .txt files containing a written explanation of what was done to recover from the penalty.

According to Google, a good request does three things:

Be as thorough as possible when writing a request, because the onus is on you to prove you’ve done what was required to recover from the penalty.

After a request is submitted, do not resubmit a new request until you’ve heard back from Google regarding the first one.

Google reviews and responds to all requests whether they’re approved or denied.

If Google approves the request then the penalty will be lifted.

If the request is denied, another one can be submitted after further effort to address the lingering issues.

It’s possible there are no persistent issues and the request was denied because it didn’t include enough detail.

That’s another reason it’s important to document your work.

If you fixed an issue but didn’t tell Google about it in the reconsideration request, it won’t count toward your penalty recovery.

Reconsideration Requests As A Ranking Factor: Our Verdict

Reconsideration requests are loosely connected to rankings but it’s inaccurate to call them a ranking factor.

In fact, there’s no guarantee that a site will regain the same rankings it once had after recovering from a penalty.

A site can, and likely will, rank much lower after a penalty because previous rankings were achieved by violating Google’s guidelines.

Google’s John Mueller stated as much while advising site owners to adjust their expectations after recovering from a manual action penalty:

“The other thing to keep in mind with manual actions in general is that, if you clean up a manual action, that essentially means in the past your website was ranking in an artificial situation.

The manual action kind of took care of that. And if you clean it up so that the manual action is no longer necessary, then your website is ranking in a different situation.

It can happen that it’s very similar to before, but it can also happen that your previous positions in search were artificially, strongly, inflated due to the things that the manual action was looking at.”

A reconsideration request has no inherent benefit to a site’s rankings, other than getting it out of the Google penalty box.

10 Ways To Optimize Your Site For Future SEO Success