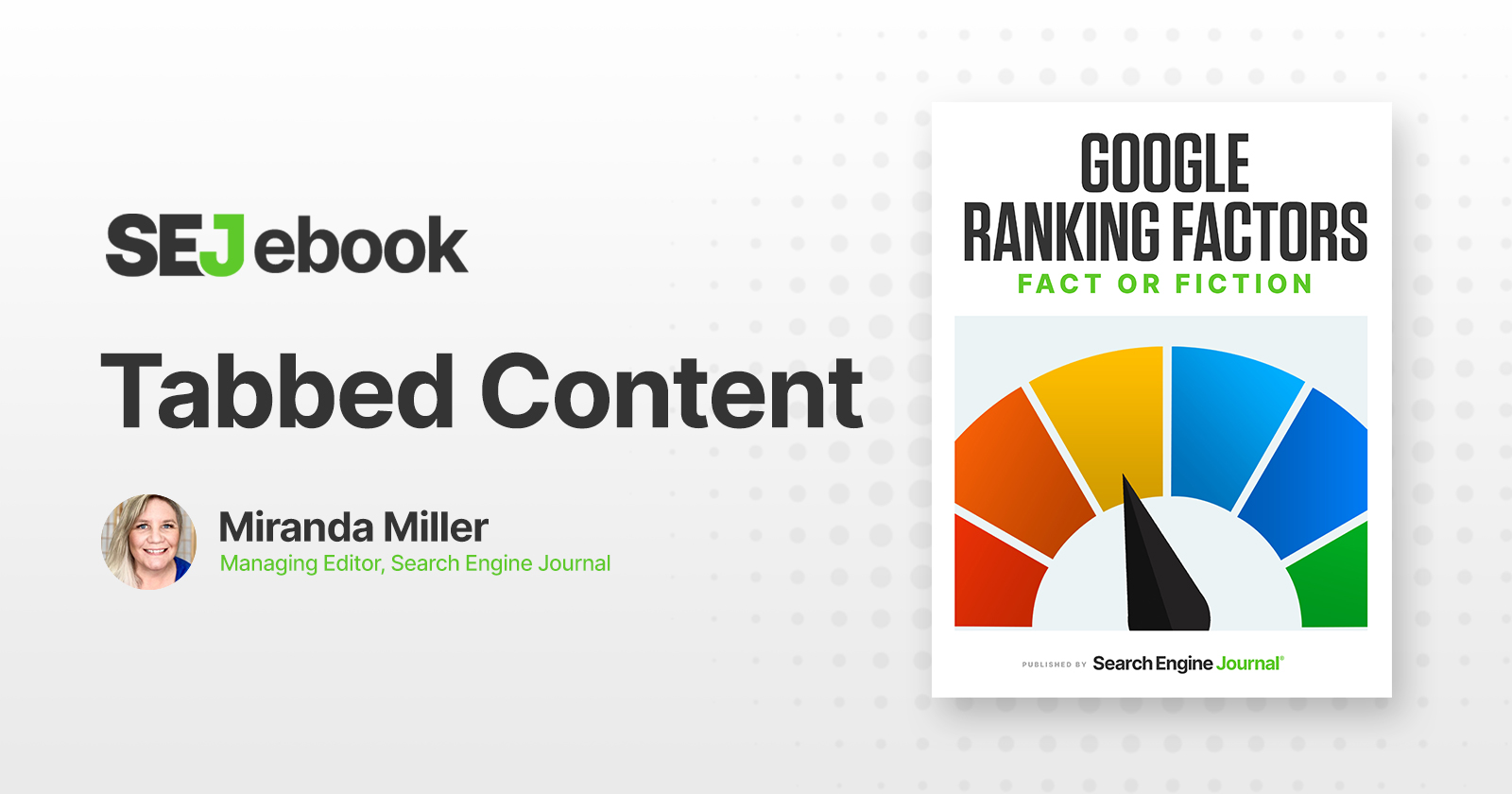 In-page tabs and accordions are a type of user interface (UI) control that can improve the user’s experience by splitting content into logical sections.

Page visitors are then able to switch between different views by navigating through each tab or clicking to reveal a new section of text from the accordion.

But how does this impact the SEO value of the content that’s hidden until the user actively navigates to and reveals it?

Many have questioned over the years whether Google still uses this type of hidden content in its ranking algorithm.

The question here is whether Google devalues or even ignores content that is initially hidden from the user using UX/design elements.

It’s important to note that we’re not talking about hiding text in an effort to manipulate the algorithm by using CSS to position it off-screen or hiding it against the background, for example.

Tabs and accordions are used to organize page content in the same way as their namesakes from the old school world of paper filing. The user can flip from tab to tab to reveal new content without having to load a new page each time.

And with accordions, users can click to open each one, typically closing the others as the new section opens (but not always, which can result in a very long page of text).

Tabs and accordions can be useful for:

The Evidence For Tabbed Content As A Ranking Factor

This is what Google’s Webmaster Guidelines has to say about content hidden in tabs:

“Make your site’s important content visible by default. Google is able to crawl HTML content hidden inside navigational elements such as tabs or expanding sections.

However, we consider this content less accessible to users, and believe that you should make your most important information visible in the default page view.”

Matt Cutts addressed the issue from a webspam perspective in a 2013 response to a viewer’s question, “How does Google treat hidden content which becomes visible when clicking a button?”

There are good usability reasons for using an accordion or tabbed structure that lets users hide and reveal content, he said.

As long as you’re not trying to be deceptive with hidden, over-optimized text, you aren’t going to trigger any spam actions.

That tells us that Google doesn’t see properly structured and formatted tabs or accordions as hidden text.

But is the content in those tabs weighted the same as page content that is always visible?

In 2014, Google’s John Mueller was asked about reports of Google, when rendering pages, ignoring content that isn’t visible to a user unless they clicked on a “click to expand” button.

“…I think we’ve been doing something similar for quite a while now, where if we can recognize that the content is actually hidden then we’ll just try to discount it a little bit. We kind of see that it’s still there, but the user doesn’t see it. Therefore, it’s probably not something that’s critical for this page.”

He noted that he was speaking of both accordions and tabs, and advised that if you want content indexed, make sure it’s visible to users.

The Evidence Against Tabbed Content As A Ranking Factor

The thing is, aside from the Webmaster Guidelines excerpt above, that advice on tabbed content is pretty old.

Google’s perception of what makes a great user experience has evolved, particularly when it comes to mobile.

In 2016, Google’s Gary Illyes responded to a tweeted question asking whether the content in in-page elements such as accordions was devalued on mobile, and his response was clear:

“No, in the mobile-first world content hidden for UX should have full weight.”

Mueller more recently confirmed in a March 2020 Google Webmaster Central office hours episode that tabbed and accordion content is not devalued. When asked:

“In the mobile-first indexing world, will the hidden content behind tags and accordions still be devalued — for example, because there is a lower chance it’ll be seen by a user?”

“No. Specifically, when it comes to content on mobile pages, we do take into account anything that’s in the HTML.

So if there is something there that might be visible to users at some point, we will include that in the indexing. That’s completely normal.”

Tabbing the content would basically be the same as not tabbing it.

So does it ultimately matter whether that content is tabbed?

We know that, with mobile-first indexing, Google gives tabbed content the same weight as the rest of the text on the page.

Content is the key part, not the fact that it’s tabbed.

There are many ways to “hide” tabbed content – some of which make it impossible for Google to crawl it.

If you’re trying to use hidden text deceptively, that’s where you run the risk of a partial or site-wide penalty.

To be clear again, here: The key part is the deception, not the fact that the content happens to be tabbed deceptively.

As best practice, use these elements from a strictly UX perspective.

Take a look at how Google itself uses an accordion structure on its Search Console help resource page: The accordion is used as a navigational tool to reveal FAQs.

Clicking on a question opens a separate page where the longer form answer lives.

This serves both UX and SEO objectives.

It’s simple for the user to see all broad topics at a glance and drill down into more specific questions.

They can then navigate to a more focused page and dig into the response they choose, versus having 15 or 20 somewhat disconnected answers in core body content opening up and closing back down on the main page.

Each individual answer is stronger from an SEO perspective as an authoritative response to a specific question on its own page.

Think first of how you can improve your visitor’s journey and experience with your content.

More often than not, that’s exactly what you need to do to improve your SEO, as well.

How To Visualize & Customize Backlink Analysis With Python